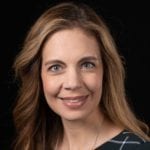 Amy Hajari Case, M.D., FCCP, received her undergraduate degree from Birmingham-Southern College and earned her medical degree from the University of Alabama at Birmingham in 2005. She completed her internal medicine residency and pulmonary and critical care medicine fellowship at the University of Alabama at Birmingham. She moved to Atlanta in 2011 to establish the ILD program at Georgia Lung Associates, which became part of the Piedmont Pulmonary, Critical Care, and Sleep Division in 2013. She serves as Section Chief for Advanced Lung Disease at Piedmont, and she directs the ILD program, which became part of the Pulmonary Fibrosis Foundation’s Care Center Network in 2014. She is also the Medical Director for Pulmonary and Critical Care Research and serves as principal investigator for numerous clinical trials for pulmonary fibrosis.  She is a fellow of the American College of Chest Physicians, a member of the American Thoracic Society, and is a Senior Medical Advisor for the Pulmonary Fibrosis Foundation. Dr. Case enjoys bringing her patients the opportunity to receive new medications and cutting-edge treatments. In her spare time, she loves travel, live music and theatre, and spending time with her family.