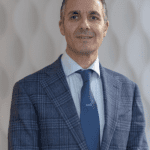 Paolo Spagnolo is an Associate Professor of Respiratory Medicine and Director of the School of Specialization in Respiratory Medicine at the University of Padua (Italy). He received his undergraduate training and his MD and completed his residency in Respiratory Medicine at the University Hospital of Bari (Italy). In 2002 Dr Spagnolo joined the Interstitial Lung Disease Unit of the Royal Brompton Hospital (London), initially as clinical research fellow under the supervision of Professor Ron du Bois and subsequently as Honorary Consultant. In 2008 he completed his PhD at the Imperial College of London under the supervision of Professor Ron du Bois and Professor Ken Welsh, with a thesis on “Genetic predisposition to clinical phenotypes of sarcoidosis”. Between 2008 and 2013, he was research fellow and subsequently Assistant Professor in Respiratory Medicine at the University Hospital of Modena where he joined the Centre for Rare Lung Diseases lead by Professor Luca Richeldi. Subsequently, he joined the Medical University Clinic of the Canton Hospital Baselland in Liestal (Switzerland) as Senior Clinical Research Fellow. At present, Dr Spagnolo is an Associate Professor of Respiratory Medicine at the Department of Cardiac, Thoracic and Vascular Sciences, University Hospital of Padua. His main research interests include interstitial lung disease – mainly idiopathic pulmonary fibrosis – and sarcoidosis with emphasis on genetic predisposition, prediction of disease behaviour and clinical trials of novel therapies. Dr Spagnolo is the author or co-author of about 100 journal articles, review articles and editorials. He is member of the Editorial Board of BioMed Research International and BMJ Open Respiratory Medicine, and section Editor (Interstitial Lung Disease) for Current Opinion in Pulmonary Medicine. He is the Treasurer of the WASOG (World Association of Sarcoidosis and Other Granulomatous diseases) and Secretary of the Study Group on Sarcoidosis of the European Respiratory Society.