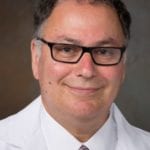 Naftali Kaminski is the Boehringer-Ingelheim Endowed Professor of Internal Medicine and Chief of Pulmonary, Critical Care and Sleep Medicine, at Yale School of Medicine. Before that he was a tenured professor of Medicine, Pathology, Computational Biology and Human Genetics, and the Dorothy P. and Richard P. Simmons Endowed Chair for Pulmonary Research at the University of Pittsburgh. Dr. Kaminski was the director of the Dorothy P. and Richard P. Simmons Center for Interstitial Lung Disease and the Lung, Blood and Vascular Center for Genomic Medicine at the division of Pulmonary, Allergy and Critical Care Medicine in University of Pittsburgh. Dr Kaminski received his medical degree from the Hebrew University – Hadassah Medical School in Jerusalem, Israel, and completed a residency in Internal Medicine at Hadassah Mount-Scopus University Hospital in Jerusalem, and a fellowship in pulmonary medicine at Sheba Medical Center in Tel-Hashomer, Israel. Dr Kaminski received his basic science training in Dean Sheppard’s laboratory at the Lung Biology Center at UCSF and in functional genomics and microarray technology at the Functional Genomics laboratory at Roche Bioscience, Palo-Alto. After his fellowship in 2000, Dr. Kaminski was appointed head of Functional Genomics at Sheba Medical Center in Israel, before being recruited to head the Simmons Center at the University of Pittsburgh in 2002.

Implications of the Insights from the IPF Cell Atlas for Drug Development 4:00 pm